"I've got all the fucking information I need."

Nash has short, curly light brown hair. He has dark brown eyes that are often narrowed to be completely honest. Nash has muscular arms and is generally slim. He's pretty athletic due to his sports and his time spent in the gym. He has lightly tanned skin and can usually be seen with a straight face. Nash wears mostly, khakis, jeans and t-shirts. He weighs 139 lbs and has a scar on his back from a knife fight he was in a while back.

Nash was born on a sunny March morning in 1999, in New York, New York. He was born to his two parents and he had one older brother, Teddy. Nash's parents were loaded, mainly because of the family his mother came from. From the beginning he had a passion for baseball, his uncle was the general manager of the Yankees and got Nash season tickets. When Nash was around 3 his little sister, Jenna, was born. A couple years later Nash's parents got a divorce, his father took him and his siblings to a small apartment where they would spend there next few years. Eventually, they moved to Lakewood where Nash will finish his senior year.

Nash has slight anger issues and gets pissed easily. He is somewhat easygoing, and a kind person at heart, yet due to his past and parent's divorce he is a little hard to grow trust with. He can be seen as ignorant but it's probably just because he's overall pretty careless about 'useless crap' he's being forced to learn. Nash is pretty defiant which makes him more of a leader and less of a follower, but since when has he cared? 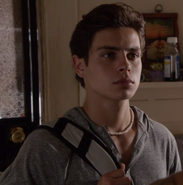 Add a photo to this gallery
Retrieved from "https://lakewood-academy-highschool.fandom.com/wiki/Nash_Byers?oldid=34576"
Community content is available under CC-BY-SA unless otherwise noted.