<soundcloud url="https://soundcloud.com/iameden/drugs" color="#4ba7b7" height="20" width="21"></soundcloud>
"I'm not good with most things but there are something that I am."

Malachi is a 5'9 make with blue eyes and blue dyed hair. He is semi muscular and fairly fast, he stays active with dance. Malachi can be seen sometimes with a hospital mask on (i'll find out why later) and band aids on his nose.

Malachi is an up beat yet laid back person, if that even makes sense. He is fairly diligent and courageous, he is serious at times. A nice person overall and a good person to be friends with.

Malachi was born in Bethlehem, Pennsylvania to Dan and Melanie Wilson. Malachi was a healthy baby but at the age of 3 he started having unexplained seizures in the middle of the night, his parents feared for his health and took him to see a doctor after the 2nd seizure. He was found to have epilepsy and had random seizures whenever durastically stressed or seeing flashing lights. He was 6 when he finally got a service puppy named Bailey. When he was 7 his mother, Melanie, and his older brother, Joshua, were killed in a car accident to which a drunk man drove on the wrong side of the road and veered into them. Malachi felt the heat of the major loss and a few months after it happened he was put on heavy medicine to calm him. His seizures subsided quite a bit, only happening once in awhile, in great times he can go through years of not having one.

His dad fell under bills and they were continuesly in and out of morgage. Malachi, at the age of 12, constantly mowed lawns up and down his block to help his dad pay for rent. He had little friends. He selflessly worked his butt off for the last of his family and once everything turned to crap his grandmother came to live with them. His grandmother, however, was basically rich with money and resorces (old antiques worth millions.) She had sat down with Malachi's father and they both decided to start a business, an old antique shop they would call Number 76 for a few years earlier Malachi's birthday cake candles were 7 and 6 for they couldn't find the 1 and 0 candles.

Malachi had to say goodbye to his house and goodbye to his friends.. He moved three times, but by the second move he had dyed his hair blue to express himself more, buying what he needed with his own money.

Finally, after a few years, they finally found a great home. 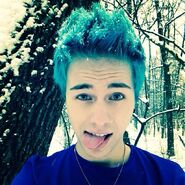 Malachi's Bedroom
Add a photo to this gallery

Retrieved from "https://lakewood-academy-highschool.fandom.com/wiki/Malachi_Wilson?oldid=22216"
Community content is available under CC-BY-SA unless otherwise noted.