Lucas is a generally quiet guy. He is kind of shy and doesn't enjoy large crowds. He barely speaks any English and the few words he knows are hard to understand because of his thick French accent. Lucas is, sweet, caring and very thoughtful.

Lucas was born in Paris. He lived with his parents and his little brother, Henri, in a small apartment in the middle of Paris only a few blocks from the Eiffel Tower. Lucas' parents owned a small coffee shop that sold pastries, coffee, and crepes. Outside of Lucas' apartment there was a small park, there were benches, trees, and a few picnic tables. Lucas and his little brother would often play soccer or football, as they called it. There were lots of tourists around where he lived and often he and his brother would pull pranks on the clueless visitors. The pranks were always harmless but regardless, after his brother would go inside Lucas would go up to the tourist and bring them a pastry from his parents shop as an apology. Lucas had the perfect life in his eyes at least, this all changed around his 15th birthday, when his parents shop was closed, apparently they were knocking down everything, the park, his apartment building, and his parents shop. Lucas was devastated, they would have to move. Lucas' father would have to find a job, and after days of searching the only job he could find was in America, Lakewood. Lucas told his dad that he'd find a job in Paris, but Lucas knew that they'd have to leave. Deep down, although Lucas would never admit it, he was scared, he'd never been to America, or even been outside of France and he didn't speak English. A few weeks later they moved, and that's where that leaves us now. 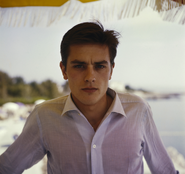 Add a photo to this gallery
Retrieved from "https://lakewood-academy-highschool.fandom.com/wiki/Lucas_Parker?oldid=29815"
Community content is available under CC-BY-SA unless otherwise noted.