"Sometimes I have to tell myself it's just not worth the jail time."

Dez is 6'0 and 150 pounds. He has light brown skin and dark brown eyes, his hair is naturally brown but it is died at the top, blonde. Dez is slim yet muscular and he has a long wingspan. He also has his ears pierced and a tattoo on his right forearm. He always wears a gold chain with a cross on the end of it. Dez is always wearing a hat and and usually wears shorts, t-shirts, sweatshirts, etc. 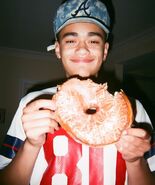 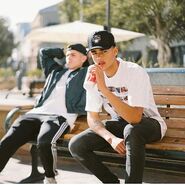 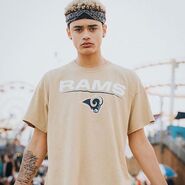 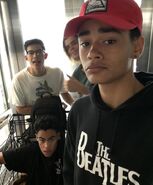 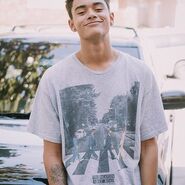 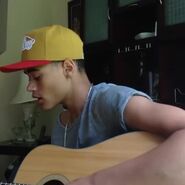 Dez grew up in Dallas, Texas. He was an only child, and grew up in a 2 room apartment. His mom worked a minimum wage job, his father was unemployed. Dez grew up in a bad neighborhood, he would sing on the street to earn money, but instead of using that money for food, which some days he would go without, he would by cigarettes. He got in lots of gang fights and would often steal, which is how he got his motorcycle. Dez's mother did everything she could to provide for the family, his father would go out looking for a job, he always failed and whenever he failed, he drank. His father was almost always drunk and if it weren't for his mom's crappy job, they'd be on the street. Dez didn't really go to school, he of course should of got, but he'd rather do other things. He would often skip school to hang out with some of the gang members. On Dez's 15th birthday, he came home from "school" and nobody was there, he didn't really care, it was usual for him to be home alone. A few hours later a police came knocking on the door, "Desmond Smith?" Dez nodded his head slowly, "you're mother was hit by a car, dead before she hit the ground I'm afraid." Dez just stood there in shock, he didn't know what to say, what to do, he froze. The police glared at him, "we found this." They held up a gold chain with a cross that his mother always wore around her neck, "we assumed you'd like to have it." They put it in his hand and walked out. The next day Dez's dad came home, Dez delivered the news to him, they both sat on the couch and didn't say anything, they just sat in silence, Dez wiped away any tears that fell from his watery eyes. A year later the same knocking was at the door, Dez's dad opened it, "sir you are under arrest for assault and for not paying taxes or your rent." They handcuffed him and brought him out to the police car, the car drove off and Dez was left, no home, no food, he was alone. After spending a few nights on the street his uncle came, he brought Dez to Lakewood, where he's living with his cousins. He decided to go by his middle name, Garret, to try and forget about himself in the past. He always wears his moms necklace, just to remember. Lakewood's in for a surprise.

Dez is a tough guy, a rebel, he likes breaking the rules. He's a bad boy I guess you could say, growing up in a place like he did, he had to be. Dez is usually cold to the people he first meets, although once he gets to know them, he'll usually start to open up. He's actually a kind of nice guy if you're in the right place at the right time.

Retrieved from "https://lakewood-academy-highschool.fandom.com/wiki/Desmond_Smith?oldid=27390"
Community content is available under CC-BY-SA unless otherwise noted.