Heyo!! What's up meh dudes? I see you've stumbled upon my humble abode. So, the name's Dash. Im from Queens NY, the best place in the world. I got two little siblings, my 8 year old brother, Caleb, and my 2 year old sister, Caroline. It's pretty nice being the oldest.. Kinda. Oh! And I'm a running back on the LAHS football team, I'm pretty fast, there's where I got my nickname. I also play basketball, not really serious about it, just like to play. I play shooting guard, I guess you could say I'm a decent ball handler and an outside shooter. But basically they only have me there for defense and steals and stuff, but it's cool. I'm a jock I guess. I mean I play football, doesn't that like, automatically make you a jock? I dunno.. The thing is I wouldn't consider myself a jock and I've been changing a ton to fit in. I've read too many books to even count I'm even named after an author! Also named after Ulysses S. Grant (I'm a huge history buff). SOo I guess you've learned enough about me, I hope I can learn more about you if our paths ever cross. Adios!

Dash has a kind of split personality, one being a kind of jerk, tough, and serious guy, the other being a cool, laid back, book nerd. Dash doesn't like people knowing he's smart, he thinks the other jocks will think less of him if they find out. He kind of stays close to the ground and isn't exactly the "life of the party" but more of the kid that's cracking jokes in the corner and talking about football. Dash enjoys party's and social events but loves having a quiet place to read. Dash would do literally anything for his family, because he's never exactly had a ton of friends to rely on. This was mainly because at his old school, he kind of embraced his inner nerd and got bullied a ton.

Dash has dark brown hair with brown eyes. He is 5'9 but still growing. Dash is 154 pounds most of it being muscle. Dash has long legs which helps him with running and has a very athletic build.

Dash grew up in Queens, New York. He lived in a small apartment with his two parents, Matthew and Kathleen. He was named after Dashiell Hammet, and his middle name came from Ulysses S. Grant. Dash was always into reading, since his mom was an English teacher. But he was mainly into history books, which his father would bring back from class, since his father was a history teacher. Dash was always a small kid and always had a book his his hand. He got made fun of a lot but he didn't pay much attention to it. Dash would always challenge kids to races on the street. He loved running and would often beat the people he challenged. When Dash was 6, his little brother, Caleb, was born. Dash always had perfect grades and kept away from any bad groups at his school. Dash had one close friend, James, who he would spend most afternoons with reading, doing legos, and talking. When Dash got into 8th grade he joined the football team, he had never played for a sports team other than his small basketball league on the playground. He caught on quickly and became a running back, since nobody could catch him while he was running. Dash loved football and it started getting him more social, and slowly but surely he made friends. Dash's parents were always strict, not allowing him to go to parties, drink, etc. Dash was always cool with that, because James and him were known as the "good" kids. At the end of 8th grade, Dash found out that he was going to have a sister. Dash also learned that they were moving to Lakewood after school ended. Dash was sad to leave Queens, but he was excited to join a new school, and create a new view of himself. Now, in LAHS Dash is a jock, and he is glad to turn over a new leaf.

Dash With His Puppy 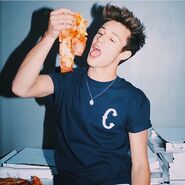 Dash With His Most Favorite Thing In The World, Food

All my oc's bite their shirts, deal with it 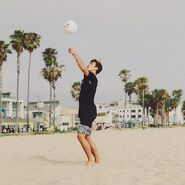 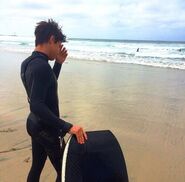 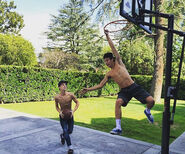 Add a photo to this gallery
</center>
Retrieved from "https://lakewood-academy-highschool.fandom.com/wiki/Dashiell_Smith?oldid=36385"
Community content is available under CC-BY-SA unless otherwise noted.