Credits to ItzNailo for the coding :D 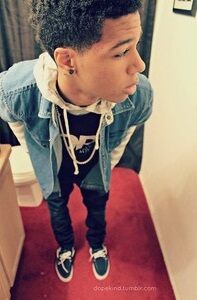 Charlie is a dark skinned male with brown eyes, his hair is kinda fluffy but short. He is 5'10 and has a tattoo on his back reading Apokalipsis. Wears contacts.

Charlie is a happy go-to person and doesn't argue unless needed, he can be flirty at times but usually isn't. Charlie is a pretty blunt and sarcastic person and isn't afraid to speak his mind. Charlie has tourettes and a fairly good memory.

Charlie was born in the city of Yekaterinburg, Russia by Lilac and Nile Volkov. He was a healthy child but he was born with tourettes syndrome, causing him to have uncontrollable tics randomly. He learned to live with it and grew up with a normal life. Charlie, when he was about 14, had to deal with has being considering he dad joined the Marines. Charlie grew considerably close with his other two siblings and enjoys spending time with them, especially Niana, his 3 year old sister. He grew up listening to the songs     his mom would show him and he soon became occustomed to choir and singing. Althought Charlie doesn't   think so, he is a fairly good artist and animator. He was younger when he joined a soccer team and he loved the sport ever since. He moved to America at the age of 4 but can speak fluent Russian. He got a tattoo at the age of 16 after his dad's last check in, it reading Apokalipsis, meaning apocolpyse in Russian.

He moved to the town called Lakewood, he has little friends, but a big hope in making more.